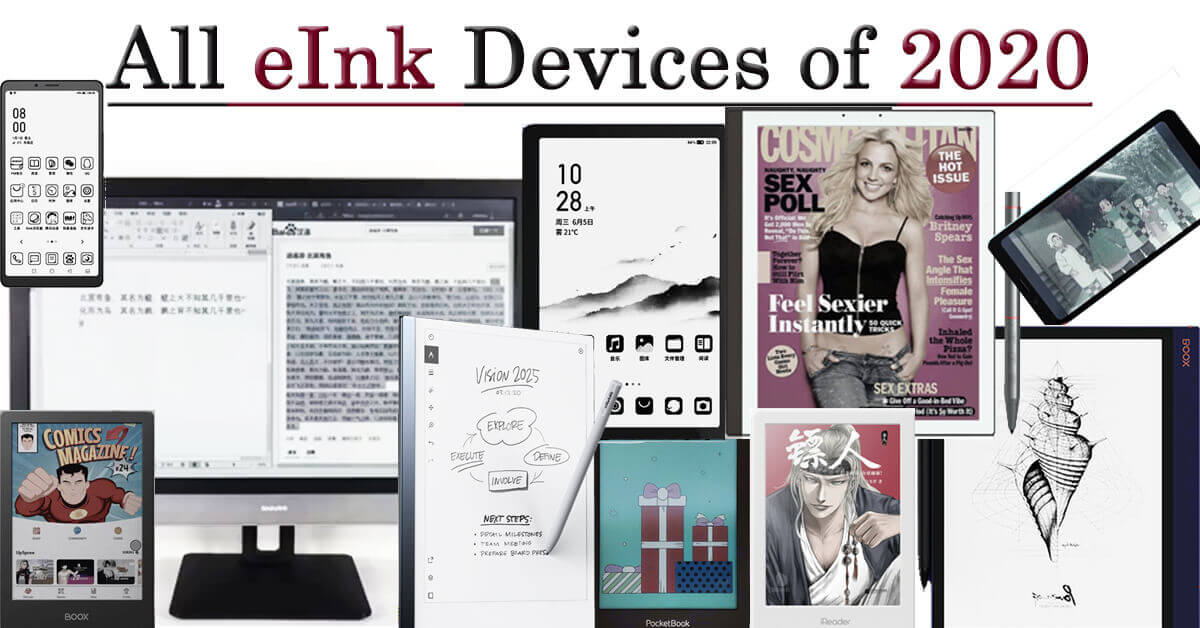 2020 was a great year for eink lovers as it not only saw a lot of new eye-friendly devices but also new technology such as Color eink (PrintColor or Kaleido) by Eink Holdings and Reflective-LCD (RLCD) by Hisense and TCL. So let’s take a step back and look at all of the eink (and RLCD) based ereaders, tablets and phones which were announced and/or released in the year 2020.

For full specs, current price, and purchasing click on the device’s name and it’ll take you to its official or an article page. Please note that the prices are subject to change. Also check out this new list of eink and RLCD products of 2021.

Let’s start off with the King Kong of eink consumer devices. Launched on Christmas Day, the 25.3 inch monitor created shockwaves around the world since no one expecting Dasung to upgrade their current line of products to such a giant size. Check out this article and video to learn more about it. It is available for pre-order from Dasung’s official site.

The Max Lumi is the successor of the successful Max 3 with the main feature upgrade being the availability of frontlight and Android 10 OS. The price is $879 with free accessories from the Boox site and you get to choose between US, EU and China Warehouse.

It first burst into the scene in mid 2020. It is a note-taking and reading tablet similar to the reMarkable 2 except that this one is 13 inches.

The ThinkBook Plus is a 13.3″ screen laptop by Lenovo with a 10.8″ eink screen on the front cover. You can findfull details on Lenovo’s website.

With designs similar to the reMarkable 2 the Note Air was released on September 2020. It’s specs are smaller compared to the Note series with 3gb Ram, 32gb storage and a 3000mAh battery. It runs on android 10 and is available from the Boox Site with Free accessories- Tips, Case and Screen Protector.

Very similar to the Note 2 with a few differences such as Android 10 instead of 9 and an upgraded processor and Bluetooth. It has 4gb Ram and 64gb storage with a powerful 47000 mAh battery. More details can be found on its official site.

In my book this is the best looking eink device of 2020. Nay, the most beautiful eink device ever (so far). The price is $399 without the pen and folio case. You can choose between two pens and three folio case with the total price being upto $647 from its official site if you choose the most premium accessories.

The A5X is the successor of the A5 and was announced and available for pre-order in December 2020. It uses the Android 8.1 OS with a locked ecosystem (unlike Boox and Likebook). You can purchase it from supernote’s Official Site. At $449 you get the standard set with Pen and Folio or you can choose other more premium options. You get a lot of options regarding the two and the price will vary according to your choice.

This is the first-ever 10-inch Color eInk e-reader/note-taking tablet. I and most of the world outside of China were aware of this device only in January of this year but judging by the reviews’ dates this was most probably released in December 2020. This is a Chinese device and was launched only within the country but it’s available on JD and it seems the site does ship internationally. But you have to use Google Translate and its pricey at 4999Yuan (around $760). You can find more details and videos about the Bigme B1 here.

The Likebook P10 was unveiled by Boyue in late December 2020 on it’s JD page. It started accepting orders from 1 January 2021. It is now available from JD at JD at 1749 Yuan. and $339 from their Official Aliexpress store.

The first major release of Onyx in 2020. It was also the first of the Nova series to run on Android 9.

This came out at the same time as the Note 3. Quite identical to Nova 2 with a few differences such as the upgrade in the OS to Android 10.

Supernote A6X – the successor to the A6 was released on August 2020 and is available for purchase from here.

This was first available for order on the crowdfunding site Indiegogo and could be used as a phone/tablet monitor besides being an android (6.0) tablet itself. After the crowdfunding was over it was being sold at their website for $498 but its currently sold out.

After releasing the 6″ mi Reader in 2019, Xiaomi launched its successor- the mi Reader Pro with a bigger 7.8″ eink screen on 15 December 2020. There were rumors of a global release in July 2020 but as of now both the products are sold olny in China and can be nought from sites such as Aliexpress, JD etc. More details about the mi Reader Pro here

A 6inch color ereader with a custom linux OS. It has 1gb of Ram and 16gb of storage expandable using the sd card slot supporting upto 32gb. It is available for purchase from NewEgg.

The iFlytek C1 was actually the first eReader using the Kaleido Color eink tech to be launched. It is currently available on AliExpress.

This beautiful compact ereader was released on July 2020 and has a 300 PPi 6″ eink screen with Android 9 as the OS. It is powered by a 2.0Ghz Octa-core processor, 2gb of Ram and 32gb of internal storage.

The color version of the Poke 2.

The successor to the Poke 2, the 3 had only one major upgrade and that was Android 10.

Boyue Likebook’s first 6inch eink ereader/tablet. It runs on android 8.1 and has 1gb of Ram and 16gb of internal storage with an external sdcard slot that can take upto 128gb.

The first eink color phone ever was released on 29 April 2020 by Hisense.

The upgraded version of the original A5 (which was released on December 2019). It was first available for order on 10 June 2020.

This 6.7″ eink phone was released on 22 December of 2020 and was a big success on the Chinese online shop JingDong. More details about the Hisense A7 here.

This one was released on 1 Feb 2021 but it was announced on 22 December 2020 along with the A7 so I decided to add it to the list too. It has the same specs as the A7 but with a color screen. It will be using the 2nd gen Kaleido (or Print Color) screen technology. It is availalbe on AliExpress for $518

If I’ve missed out on any device/product please don’t hesitate to message me on Facebook Page or Group or comment below.