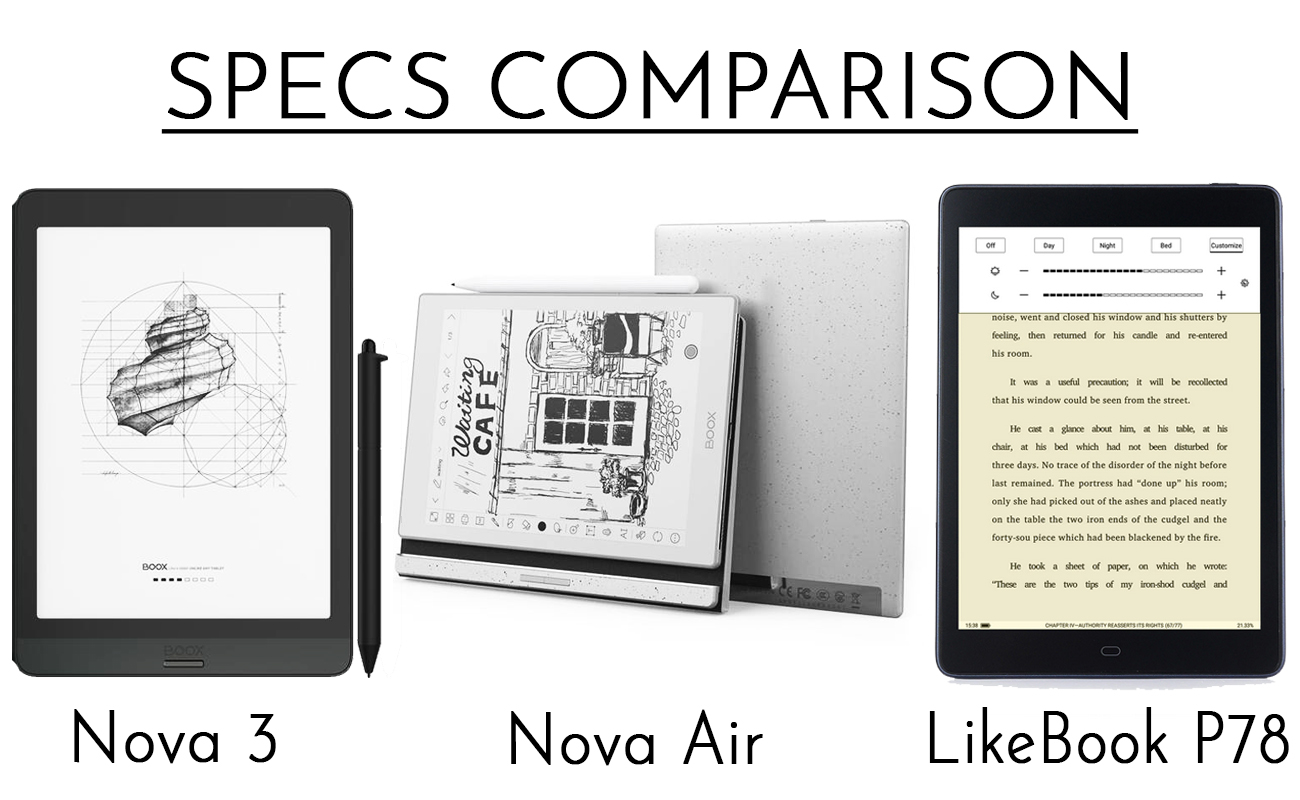 So you’re in the market for a 7.8″ android eink device but don’t know which one to buy? Hopefully, the side-by-side specs comparison of the Onyx Boox Nova Air, Nova 3, and Boyue Likebook P78 in the table below will help you make your choice.

Okay first off let’s talk about the differences between these two. As you can see from the pics the Nova Air it is absolutely gorgeous. The aesthetically-pleasing level is very high. The cover and pen also magnetically attach to the tablet which I (and am sure others too) like. The cover also comes with physical page-turning buttons, which is pretty cool (I think they’d make more sense if placed on the other side though). It is also smaller, slimmer and lighter than the 3.

But Onyx Boox was able to do this only at the cost of the battery– which went down from 3150 mAh in the Nova 3 to only 2000 mAh in the Air. Other than that most of the specs and features are the same.

Update: The promised 10$ discount on the image above is no longer valid. It is now only applicable to Note Air, Note 3 and Max Lumi. Code is DQ8SRT8T8Z

If you’re looking mainly for an e-reader of this size then the P78 would be a better choice for you. You get an android e-reader with the same screen size, resolution and PPI at a much cheaper price. Plus you get free shipping when you buy from their AliExpress store.

The P78 has an expandable memory slot (which the Novas do not) which supports upto 256GB of storage. 32GB for an android device might feel insufficient for some people but there are many cloud storage options to choose from so it might not be a problem if you use those.

It also has the biggest battery among the three, which is pretty great considering its price.

But if you’re planning to take notes or do some drawing regularly then you’d be better off with the Nova Air or 3 since the P78 doesn’t have a wacom layer (you can use a stylus though). Personally if I had to choose between the two, I’d go with the Air mainly for the aesthetics and easier portability. But if a longer battery life is important then the Nova 3 is the device for you.