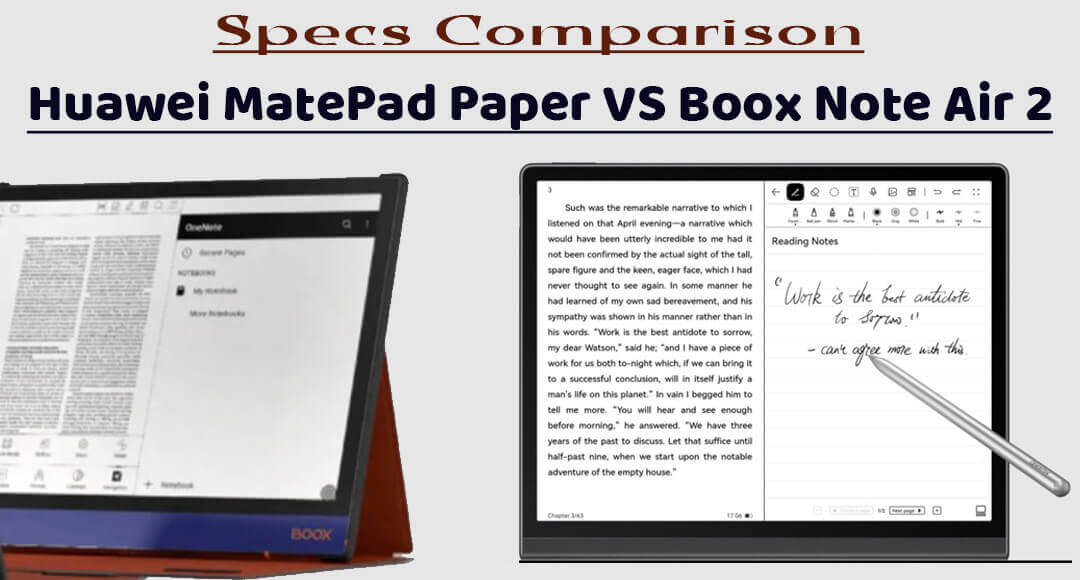 In this article, we will look at the specs differences between the Onyx Boox Note Air 2 and the Huawei MatePad Paper. I’ll also delve into some of the obvious advantages of both these devices.

Advantage of the Note Air 2

Note Air 2 has Google Play and while you can install android apps on the Matepad Paper there are some apps that wont work especially Google apps like Gmail, Drive etc. It’s not official but it can be easily activated from the settings and it works perfectly fine. Personally from my experience (having owned a Hisense A5pro cc) there are workarounds for Google Apps but it is sometimes inconvenient. Of course this depends on the apps you use.

The biggest advantage of the Huawei MatePad Paper in comparison with not only the Note Air 2 but other android eink tablets out there is the ease of purchase and lower overall cost. Being an international brand, Huawei’s products are available regionally in many countries. So if this is the case for you then the Matepad Paper will also be purchasable directly from your country’s top tech online shops once it is released. You won’t need to worry about high shipping and import fees (which is the case for most eink products).

It also has a bigger battery while at the same time being 60g lighter than the Note Air 2. Couple that with the fact that it’s smaller too so it’ll be much easier to hold. The Air 2 is thinner though.